The studio is often called the world’s most prestigious and successful animation studio. The unique anime art, animation style, and emotional storytelling make the films different.

And the films are often about the environment, historical events, or issues facing children, such as bullying. They have also addressed themes like war and natural disasters.

Studio Ghibli’s animated films have been consistently ranked among the best-animated films of all time by industry professionals, critics, and audiences.

Related: History of Animation and its Evolution in Film

In this blog post, we take a look at some of the most important animation lessons that Studio Ghibli has to offer. These are lessons that can help in any animation project, no matter what style is being used.

Studio Ghibli films are a combination of stunning visuals and great stories. They tell stories that are not only entertaining but also inspirational. 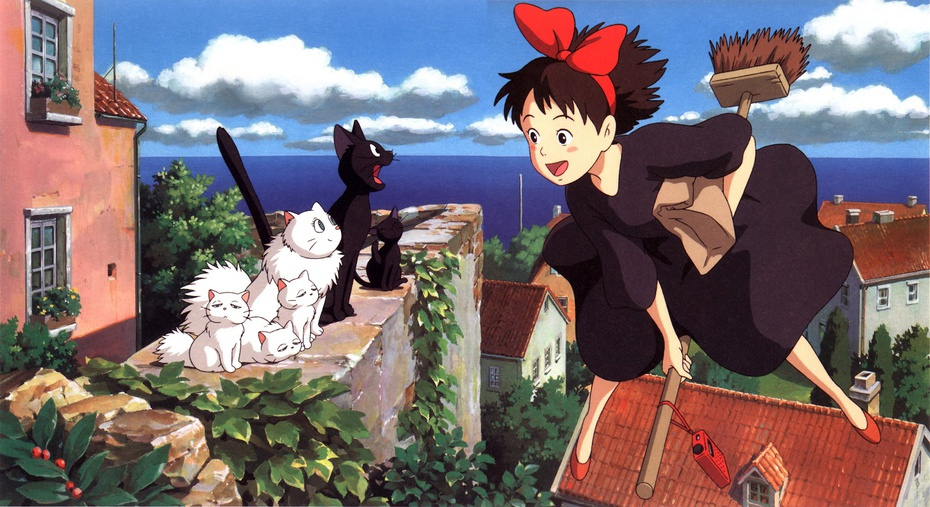 These animated films have a significant impact on the audience, mainly because of their storytelling. Sometimes, the effect is so strong that it even influences the viewers’ personality traits, as seen in studies conducted by different researchers.

Kishōtenketsu is the storytelling method used by Studio Ghibli.This technique has been used in Japan for centuries. You can find it written in Chinese and Korean under several different names. The four sections that make up the structure include ki (introduction), sh (development), ten (turn or twist), and ketsu (conclusion).

My Neighbor Totoro is the best example of visual storytelling from Studio Ghibli. It introduces and develops the setting when Mei and Satsuki reach rural Japan and meet Totoro. The sudden turn that occurs when Mei flees comes as a surprise. So, Kishōtenketsu is at work here.

Another example of great visual storytelling is The Red Turtle. The film is entirely made using pencil and watercolors.

The film tells the tale of a guy who finds himself shipwrecked on a barren island, encounters a local woman, and is later brought back to the island by her. Although this narrative is not in any language, everybody can understand it because of its great visual storytelling.

2.  Attention to detail and composition

One of the aspects that makes Studio Ghibli films so aesthetically pleasing is their use of composition to make everything look real. When making a drawing, it’s crucial to think about how the audience will approach it and what they’ll notice first. The arrangement of elements within the frame of a photograph or scene is what we call composition.

It is necessary to think about what is most important within the frame. This could be the main characters, the setting, or even a hint about the plot.

To make things look real, attention to detail is required and Studio Ghibli excels in creating a world from scratch.
Let’s take an example from Spirited Away. 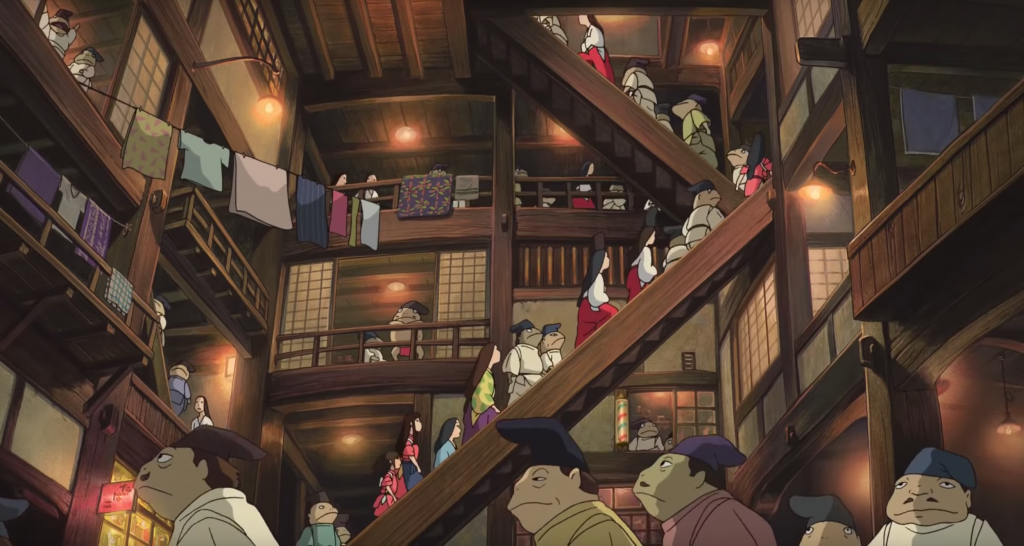 The bathhouse appears to be alive and real even though it is unbelievable. Spirited Away‘s world has it because its composition is so well made: there are workers with jobs to do, sleeping quarters, a busy vibe, a coal-powered furnace that heats the baths, and various kinds of soaps for various clients.

You see the scene and you end up wondering how all these workers’ lives might be. It seems as though unwritten stories are developing in the background with all of these aspects.

Watch this video to learn how Studio Ghibli does it.

3.  The portrayal and design of the characters

As with any story, it is important to have characters that are relatable and have depth. A great way to do this is to make the characters interesting and different.

The films have 3 different realms; human, supernatural, and natural. The stories have characters that come from these worlds and interact. The supernatural beings can be dragons, monsters, and spirits. These spirits are sometimes from the nature realm such as the forest spirit or water spirit.

Another possibility is that the characters are human but they can also wield supernatural powers.

For example, Haku from Spirited Away. 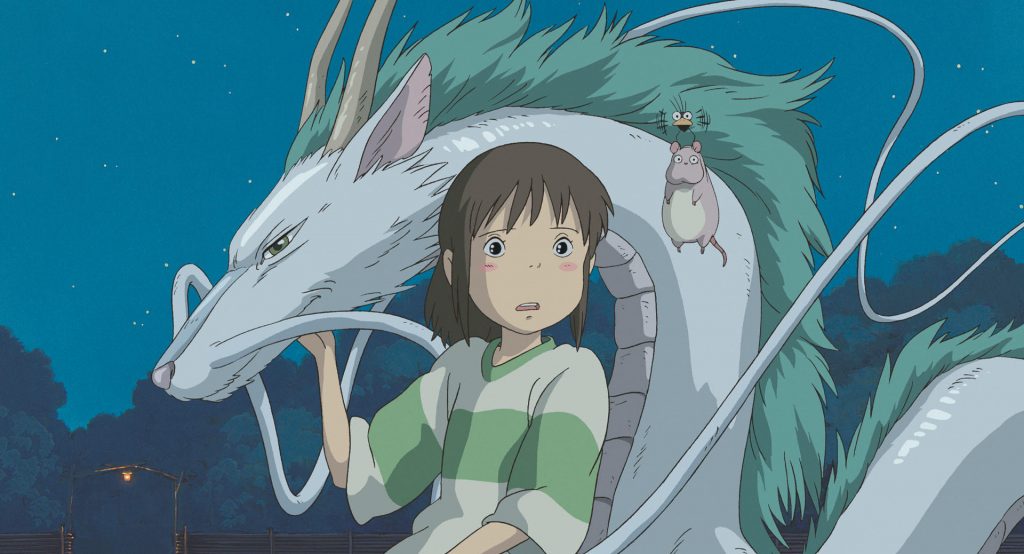 Studio Ghibli shows the human side of almost every character they make. For example, in Princess Mononoke, the giant wolf deity ‘Moro’ plays a significant role in San’s tale, shaping San’s character development through her fierceness and protectiveness. 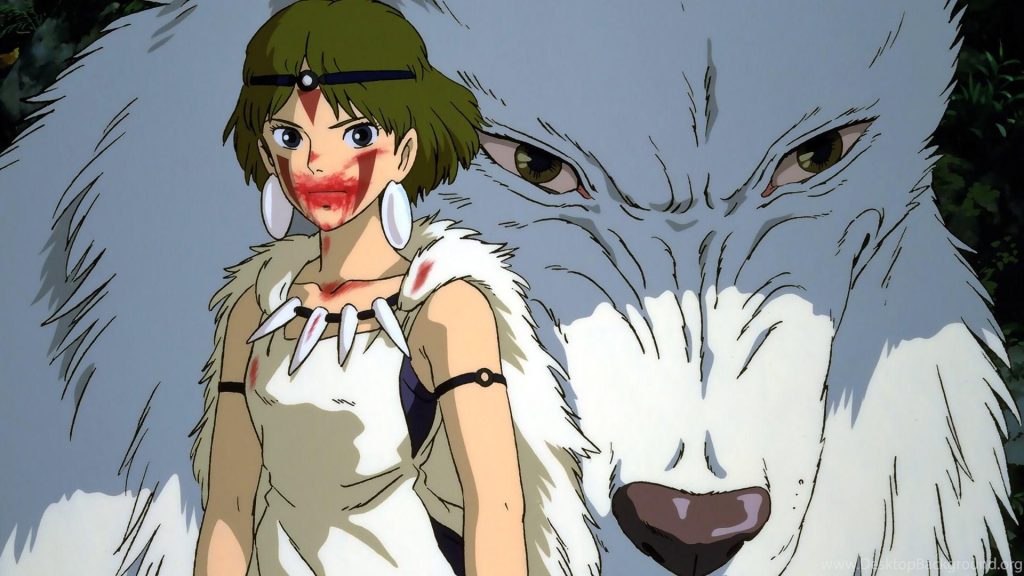 Strong character growth is at the core of Ghibli films’ character designs. By paying close attention to even the smallest details, we can understand the character’s emotions and personality traits.

Even the background characters are full of information and personality, as evidenced by their clothes, who they are traveling with, and where they are going, giving the impression that they serve a purpose other than simply making up the background.

Miyazaki’s films take an unconventional approach to animated art in that they don’t emphasize a good character defeating an evil one. His motivational outlook emphasizes resolving conflicts rather than coming up with more conflicts.
The characters from Howl’s Moving Castle are a great model for character design.

Let’s take the example of Howl, the protagonist from Howl’s Moving Castle. He’s portrayed as having flamboyant, self-assured, and mysterious personality traits. He first comes out as not caring all that much until he meets the female protagonist. His appearance also undergoes numerous changes throughout, from having various hair colors to being a big black bird.

As the film develops, his character develops and he ends up becoming someone who protects people that are important to him. 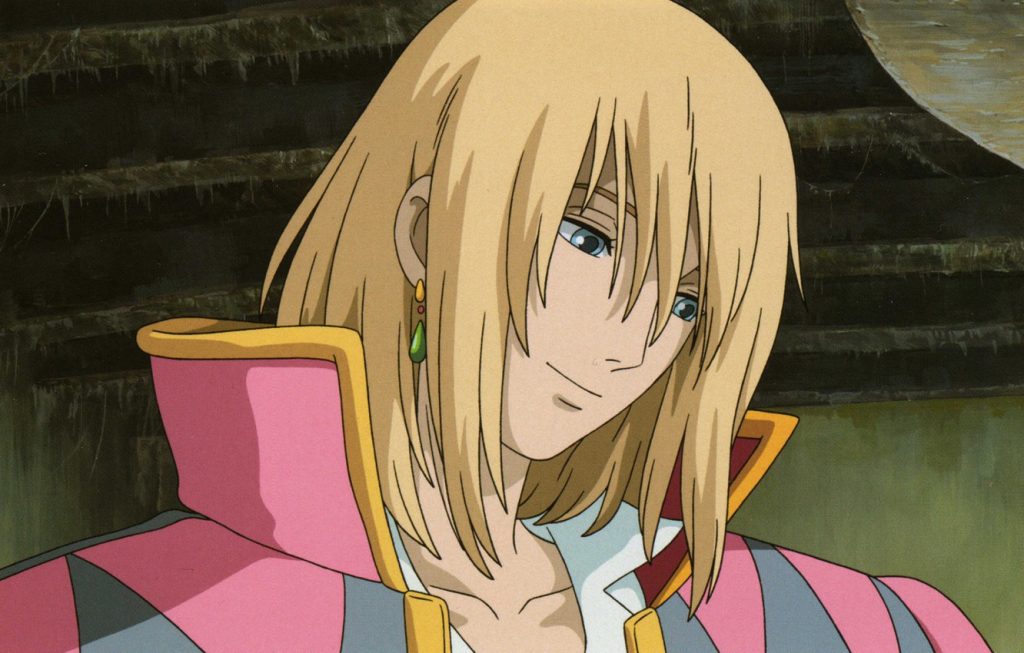 4.  Importance of the environment

It is possible to depict complex environmental issues through animation in a way that keeps broad appeal, as seen in Miyazaki’s works, which provide viewers with moments of escape into fantasy worlds that nonetheless echo the challenges of modernity and its impacts. Not only this, but the films also show the relationship of humans with nature by animating different ecosystems and environments. For instance, Miyazaki shows us the evils of industrialism in Princess Mononoke.

While in Nausicaä of the Valley of the Wind, we witness a difficult relationship between humans and nature. It tells the tale of a catastrophic event that causes havoc on the world’s ecosystems and was published with a special recommendation from the World Wildlife Fund for Nature. 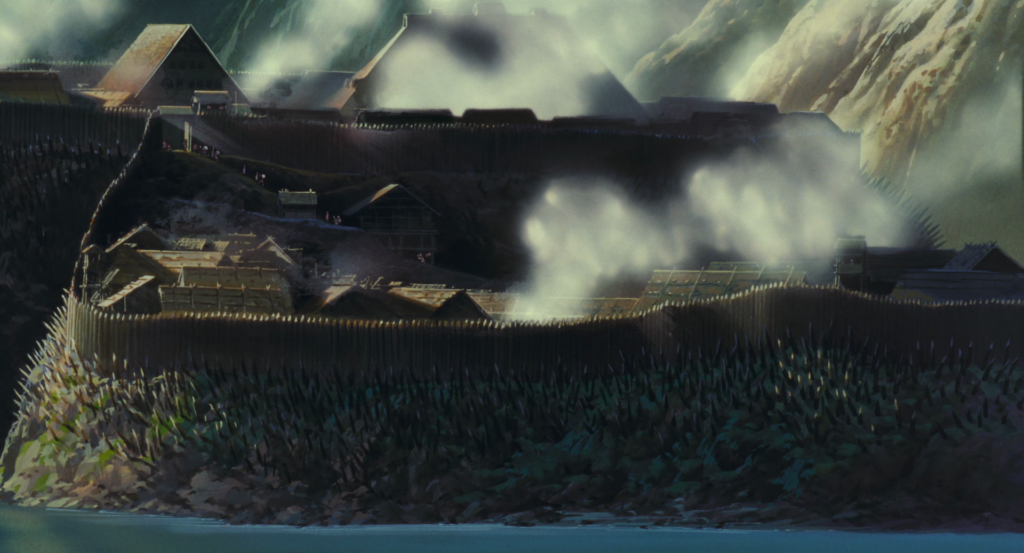 Human survivors must dwell in the Toxic Jungle, a perilous environment full of lethal fungus spores. Most people, who want to eradicate The Toxic Jungle are scared of it. They fail to realize, however, that it is for their own benefit that the jungle is cleansing the environment.
The film serves as a reminder that waging war against nature only results in our demise. We must cooperate with nature rather than fight it if we are to build a sustainable future.

5.  Balance between old and new media

Animation professionals at Studio Ghibli hand-draw every single frame before assembling them to produce the film and provide the appearance of movement. Ghibli’s manager and producer, Toshio Suzuki, said that the upcoming film How Do You Live? started filming in 2016, took about a year to create only 12 minutes of the film. They hope to wrap up the project by 2023. Five years, then!

Every single frame in a Ghibli film will either calm you down or give you the chills because so much time was spent drawing and perfecting the visuals. Even though it is a repetitive and hard process, Hayao Miyazaki, says “hand drawing on paper is the core of animation.”

But he has slowly and deliberately embraced the opportunities that new technologies have given to his design of films. As long as he strikes a careful balance that protects the authenticity of his hand-drawn process.

For instance, digital paint was used to speed up the process and complete Princess Mononoke on schedule. The first Studio Ghibli movie done entirely with computer animation is My Neighbors the Yamadas. Studio Ghibli has inspired many western cartoons such as We Bare Bears, Adventure Time, and The Simpsons while some of the films include Toy Story 3, and  Avatar: The Last Airbender. Wes Anderson’s Isle of the Dogs was also inspired by Ghibli.

Stop-motion animation was used for this film. Each character and object in stop-motion animation is physically moved, shot, and then individually animated one frame at a time to give the appearance of movement. But, the film has similar vibes as Studio Ghibli films.

There is a unique emphasis on the environment, which is reminiscent of the lush landscapes and anthropomorphic animals found throughout Studio Ghibli’s work.
Megasaki City’s dogs were exiled to a landfill because the harsh setting emphasizes the enormous amounts of toxic waste that humans produce. And all of this was done using the stop-motion technique rather than hand-drawn illustrations.

There you have it. We hope you discover some films you will enjoy just as much as we do but, more importantly, you find these lessons useful. Studio Ghibli is truly a gift.