Here’s What You Can Learn from Apple Commercials

From humble beginnings in 1976, Apple became the epitome of the American dream. In 1983, the company’s revenue was an impressive $583.1 million. Compare that to 2019, when Apple announced quarterly revenue of $53.8 billion.

The tech company has continued its streak of innovation and dominates the market for high-end gadgets. Several factors have helped the company achieve and sustain its massive success. One of those factors is its incomparable advertising.

Ever since the Apple came into existence, it has proved its mastery when it comes to commercials and public relations. The campaign strategy that’s been in place since the very beginning has served the company well.

You can’t help but admit that Apple commercials are unique and leave a lasting impression. The fact that the company’s ad campaigns have become case studies in marketing books proves that the marketing ethos behind the tech giant is worth taking note of.

In this post, we’ll take a look at some key features that distinguish Apple commercials and what you can learn from them.

Here’s What You Can Learn from Apple Commercials

Back in the day, people used to believe that computers were just a fancy piece of equipment only big corporations or governments could afford. When Apple released their PCs, they knew they had to address this misconception.

The company accomplished that beautifully with the “Out of Reach” ad for the Macintosh Classic II. When this PC came out, people were largely unaware of the fact that computer prices were falling and that the gadget could be used at work, too.

The commercial shows a white-collar fellow riding a motorcycle in the middle of the desert; heading to work. He proceeds to snatch the computer off the ground and continues on his way.

The ad is simple, eye-catching, and delivers the message in a succinct manner.

The key takeaway: If your target audience has some incorrect perception regarding your product, service or brand, don’t be afraid to correct it.

2. Associate your brand with people of substance 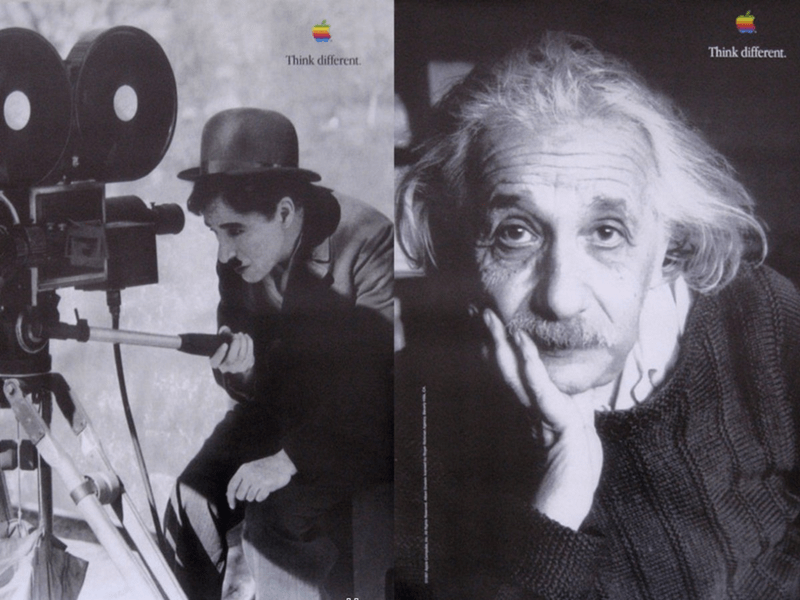 Apple launched its memorable “Think Different” campaign as a counter to IBM’s “Think” slogan. Steve Jobs had also returned by this time and the campaign went down in history as incredibly daring while still staying true to the company’s brand identity.

The key takeaway: You should always choose to associate your brand, product or service with people who have depth of character and demonstrate admirable qualities.  If you link your business to people who are famous for shallow reasons, you’ll miss out in the long run.

3. Show how your product or service can help people reach their ideal state

People are always in the pursuit of happiness. If your product or service has the ability to bring joy, then make sure your target audience knows it. Apple commercials regularly demonstrate this by showing how much fun a person can have with their products. You can see that in this AirPods ad, which shows a man bouncing off pavements to a head-bopping tune.

The key takeaway: Show your audience how you can help them get closer to their ideal state. This ad does that well because it captures something that a lot of people often fantasize about: having a regular day transformed into something extraordinary.

4. Help people connect with your brand

Once you know who your target audience is and you’ve crafted your buyer’s persona, you need to make an effort to connect with the people. Your brand should resonate with your audience and the commercials you put out shouldn’t alienate a large group of prospects.

Apple’s iPod advertisement—featuring stylish silhouettes with music from artists like Mary J. Blige, U2, Coldplay, Bob Dylan, and the Black Eyed Peas along with iconic hits like “Are You Gonna Be My Girl?” by the Jets—does a great job of connecting with people from many different walks of life.

The key takeaway: With the still-recognizable silhouettes, Apple managed to resonate with a wider section of its audience while beautifully demonstrating their innovative product along with its features.

Anyone watching the ad would easily be able to connect to the commercial on a personal level. At a time when personalized marketing wasn’t so simple, Apple certainly knew how to get the job done.

Looking for more advertising inspiration? Check out our post on why GEICO commercials are so effective.

A lot of companies tend to tip-toe around the topic of asking their audience to straight-up buy their product. Apple commercials don’t shy away from that. The company’s advertising team created an entire series of playful commercials titles “Mac vs PC” that tells the viewer to “Get a Mac”.

The ad introduces an actor who plays “Mac” and another actor who portrays a somewhat nerdy “PC”. The series consists of 66 videos with a clear CTA at the end of each one.

The key takeaway: If you have a product or service that addresses your target audience’s needs and offers an unparalleled solution to a genuine problem, don’t be shy and tell people about it.

6. Create commercials that reinforce what your brand stands for

Who can forget the iconic 1984 Macintosh commercial? Ridley Scott introduced several powerful ads and directed the “1984” commercial as well.

The ad painted a nightmarish Orwellian future straight from the popular 1984 novel. A woman in red shorts is shown wielding a hammer who then shatters the dystopian narrative.

The commercial closes with a powerful statement: “On January 24th, Apple Computer will introduce Macintosh. And you’ll see why 1984 won’t be like 1984”.

The ad fits the company’s stance on bringing power to the people and subverting the status quo.

The Key takeaway: Create compelling commercials that tell a story and reflect your brand values.

If you’re looking at brands whose campaigns have gained massive popularity, keep in mind that going viral shouldn’t be your goal. With shrinking attention spans and an endless ocean of content, focusing on making your content go viral won’t get you anywhere.

Read more: Why You Shouldn’t Be Hell-bent on Creating Viral Video Content

If you’ve made it this far, you probably admire Apple for the popularity and status it has achieved. The fact that they have managed to build such a dedicated fan base is also a tremendous feat in and of itself.

So, what’s the one common denominator that has kept Apple on top when it comes to high-end brands? Marketers would agree that it’s word-of-mouth. Apple commercials do a great job of creating buzz around their products.

The company’s advertising engine is one of the most effective in terms of encouraging word-of-mouth marketing. It’s how the brand has become so powerful and still manages to crush it in a competitive market.

As a marketer, if you can grasp the factors discussed in this post about what makes Apple commercials effective, you’ll be able to apply them to your own campaigns even if you’re in a completely different industry.

It all comes down to understanding your brand; your audience, and delivering your message in a novel and inspiring way. What’s your favorite Apple commercial and why do you think it’s great? Share your thoughts in the comments.