How to Write an Effective Explainer Video Script?

A 60-second explainer video wields a lot of power when it comes to telling a convincing story about your business. Have you ever tried writing an explainer video script? It’s not easy, is it? The toughest part is to figure out where to start cutting.

There are a lot of things that need to be factored in when it comes to making an explainer video. The duration, the objective, the script, and then the visuals.

Before you start designing the visuals or deciding on music and audio, you have to pay very close attention to your explainer video script being indisputably a worthy piece. It is the ground zero of a top-notch explainer video.

Why do you need an explainer video Script?

Hold up just a second before you start making striking illustrations and animations. A well-thought, effective script is the foundation of a killer explainer video. You cannot build a good video on a bad script.

Explainer videos have proven to be a big hit in the market. The reason behind this is that you can explain your product or service through them with versatility. A script is a determinant of how the visuals are going to turn out in terms of mood and setting.

Scriptwriters and design team must work in close circuits for content to not get lost in translation.

Let’s talk about a few things you can keep in mind before you get your writing game on. A script that is structured, brief, precise, and concise is the recipe for a killer explainer video.

Knowing your audience, how long is a script, having a clear call to action and an objective or message to your video is imperative for it to be effective.

Here is a thing about explainer videos, some of them can be a real snooze fest. How do you stop yours from being one? This is a very important question to ask. 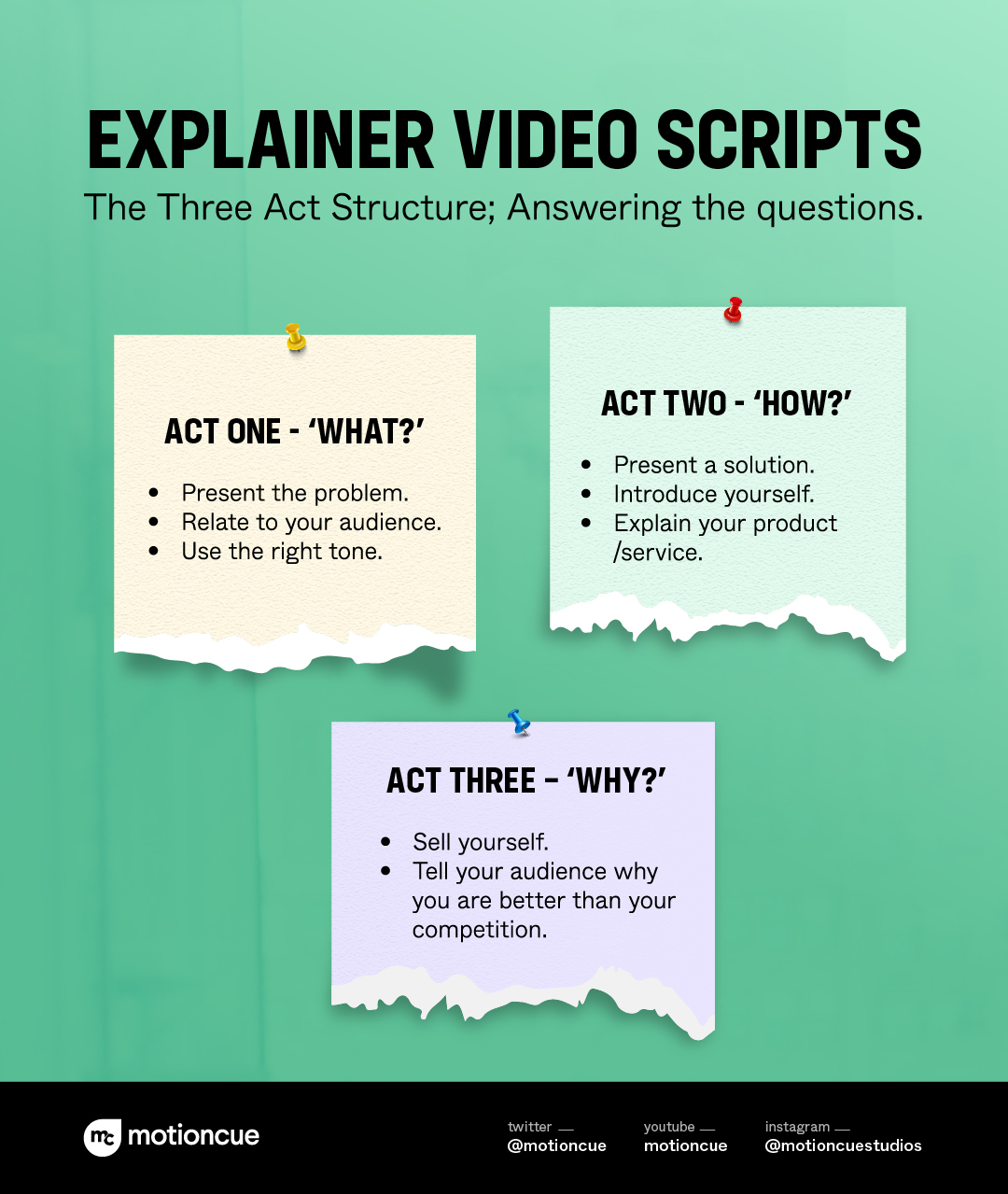 According to this structure you have to follow the question of ‘What’ in the first act. The answer to this ‘what’ usually presents a problem.

The second act includes an answer to ‘How’. The answer usually entails a solution to the presented problem. This is where you introduce yourself (your product/brand/company)

The third act answers the question of ‘Why’. In this act of your explainer video script, you explain why your solution (product/brand/company) is better than all the other solutions available in the market. This act is mainly you trying to one-up yourself from the competition.

The three-act structure for an explainer video script helps you break down your agendas and objectives for your video. You can efficiently explain your service features and qualities while being salesy.

What does an effective explainer video script entail?

The key to writing a professional-looking script is using Adobe Final Draft. It gives you the proper alignment of dialogues, background, and scene along with camera directions. You can use the free one month before purchasing it. There are several questions you need to ask yourself when it comes to writing a script that is to the point.

There is a very basic saying in this business, marketing to the wrong audience is marketing wasted. Make sure you have your audience demographic pre-decided before you plunge into the task of writing a script. You can always mention them in your script. It could just as well translate into a high buying intent.

The question-and-answer format always works. Present your audience with a problem. Mentioning their problems makes your audience relate to you. It makes them go, “Oh! They get it.”

Now that you have presented the audience with a problem that makes you relate to them this is the time to pop a solution. So, when you hit them with a solution that is your product, they are more open to listening.

Know your competition. If there already are multiple solutions to your audience’s problems, elaborate in your script about what sets you apart from every other similar product present in the market. What are you offering that is more than the solutions already there?

Who doesn’t love a freebie? Give your audience a chance to build an affinity for your product by offering a free trial. They will figure out the effectiveness of your product by way of using it. This will help them in making a buying decision better.

Always leave a web address on screen and in your explainer video for your audience to find you need be. Not just a web address, but also plug in your social media and increase your visibility.

Always include the tagline of your product in your explainer video script. It helps create a brand association. If your brand does not have a tagline, make one up and use it wherever you can in your campaign.

Here are a few criteria that could help you out in writing an effective explainer video script.

How long is your script just depend on your target audience? Say you are addressing an audience in a seminar in an auditorium. You have a maximum of six to eight minutes to capture their attention.

The sweet spot as far as the length of an explainer video is concerned is considered to be between 60-90 secs.

Here’s a short 80-second explainer video we made for one of our clients.

Sometimes information is too much to be concluded in under one minute. Here is what you can do to keep your video practical.

Condense the information in your video to one question. Come up with a one-liner to answer that question. Place that sentence somewhere in the first thirty seconds of your video.

What this does for your audience is to help them gear up to find out what exactly are they looking for in your video, what they need to be paying attention to.

Your screen time is precious, don’t waste it on telling them something that they might already know. Be as brief as possible.

Always use second-person pronouns (you, your) in an explainer video script. By speaking to your audience directly, you are commanding their attention and engaging them as you can in no other way.

Talk about them instead of talking about yourself. Instead of elaborating on how well you are doing now because of this product, explain how they can benefit from it. Give a solution to their problems.

This is where knowing your customer base comes in handy. It helps you determine exactly how you want to keep the tone of the explainer video script while speaking to them.

Marketing language varies greatly when it comes to different demographics and psychographics. You cannot be too casual with a baby boomer and you cannot be too formal with a millennial. Don’t mansplain to a female audience, that’s just wrong.

It just depends on who your audience is. They might like a little light-hearted banter, a bold and vibrant outdoorsy visual, or a funky colorful animation.

Talking down at your audience is a rookie mistake. Don’t sound overconfident or too sure of yourself. Be humble and empathetic. This way they will be more willing to let you help them by selling to them.

A story-driven video does well if it has believable, real-life characters in them. You can take inspiration from people you know from your life. This way the dialogue, scenery, characters, and tempo will flow more naturally.

Define your character to your audience, present a problem, introduce a solution by bringing in your product, explain how the product works, piece of cake.

The thing is, hard facts and dry statistics are for students who have no choice but to listen to their teacher. A web surfer, on the other hand, has the power to exit your video whenever they get bored.

So, remember to keep them entertained instead of pushing lifeless content. Tell a story about yourself to help them understand what you are offering and how it can help them. They might just think about letting you.

If you can tell a story in an explainer video, you can tell a joke or two as well. No, don’t go in with classic run off the mill knock-knock jokes. Make them flow seamlessly. Use the kind of humor that supports and complements the objective of your video.

However, humor can be a double-edged sword. You have to be mindful of the socio-economic landscape and not trigger or offend any of your audience. Several companies have landed into a bit of a PR crisis trying to be funny.

You don’t just have to use humor in your explainer video script. You can also add humor through your animated on-screen visuals.

In a simple real-life conversation, you may be able to hit an average of 200 words per minute. However, while doing a voice-over for a video, you have to be mindful of being decipherable, having a breathing room, giving time to the audience to absorb the message, and giving pauses for effect.

So, you have to time the number of words in your explainer video script to at most 120-150 words a minute. Otherwise you may end up overwhelming your audience which can result in them not being able to understand your message and leaving the video halfway.

As has been said before, a good explainer video script is the foundation on which your entire campaign lies. You cannot be hasty with it. Take your time. Ask friends and family to read it. Value the feedback that you receive. Make it edgy and convenient.

Here is a guide on how to write an amazing infomercial script as well.

We have already covered all the bases in the tips and tricks section. However, it is better to summarize different formats one can employ while writing a script.

Other formulas have not been discussed above. Let’s elaborate on them, shall we?

It is an extension of the stand-alone story format. It helps you relate to an audience by generating a character. This character has one or more of the same pain-points as your audience. Bob’s Repair explainer video can serve as a good example here.

Bob here is an example. You can use any name as long as it is familiar and friendly sounding. You can’t very well name your character Octavius and expect your audience to relate to him.

Here are the steps to this trope:

It is edgy and it is convenient. Don’t beat about the bush, literally cut to the chase. This formula does not involve you in explaining the problem in great detail.

The main part is to push your product as the ultimate solution to the problem, the figurative secret sauce to your recipe.

Here is a breakdown of this formula:

The more straightforward, cookie-cutter technique is sharply targeted towards a large audience including multiple groups of people.

By generalizing the subject, this formula touches most people. This how it can be interpreted.

We can all agree that writing an effective explainer video script is no cake-walk. Not only does it have to be effective, but it also has to be entertaining. Connect with MotionCue to have your explainer video made.

The trademark and target market vary for all companies. It is important to incorporate that information in your explainer video script by altering the diction and phrasing.

We hope that this article helped guide you on how to write an effective explainer video script that will help you move the viewers right into a purchase.