Advertisement on social media is laden with opportunity. Facebook with its registered 2.38 billion users is the undisputed Goliath of social media. Whereas Instagram, with 1 billion active users, is the fastest growing social network.

Together, they have unleashed a plethora of possibilities and business opportunities when it comes to digital marketing. However, you can only benefit from them if you know how to use them.

Testing is the backbone of marketing, be it image ads or video ads on Facebook and Instagram. It lets the advertisers find out what works best for their ads for them to incorporate it into their strategy.

It helps them generate more business and increase leads. Digital marketing is all about getting better results for less money.

Video advertisement has proven to be one of the most important mediums when it comes to digital marketing. A play button is the most compelling thing on your newsfeed.

According to a MotionCue survey, 83% of users agreed that watching a product/service explainer video helps them in making a buying decision. It is safe to say that it is a promising means of marketing.

However, can be expensive. Which is why it becomes difficult to create and test multiple variations of video ads like we do for image ads.

It could leave you thousands of dollars short.

So, how do you test the performance of your video ad and improve it without wasting a lot of capital? Here is how.

We ran video ads on social media and collected insights to help us improve our video without breaking the budget.

How to test a video ad

Facebook Business Manager provides you with tones of valuable data that you can leverage to deduce results about your video ad that could help you to improve its performance.

These may just look like numbers but the more important thing to remember here is that numbers are never inconsequential when it comes to digital media. In fact, numbers are everything.

Check how many people started watching your video and stayed up to 25%. If the drop in the viewership is negligible then the first quarter of your video is performing well. Repeat the same process for 25% to 50% so on and so forth.

If there is a significant drop in the number of views in a specific block of your video, improve that block only. It will save you a lot of money.

My company experimented with our video on Facebook and analyzed the numbers that the Facebook Business Manager gave us.

The data of our video’s performance looked something like this:

Read more: How to Identify the Right KPIs for Your Video Marketing Campaign

Now that you have some numbers, it is a whole different ball-game to be able to decipher them. Here is how you can read that data:

People who started the video

From Impressions, we can see that a total of 53,868 people started watching the video.

Out of the 53,868 people, 1347 or 2.5% are the ones who started watching this video because they have the Auto Play function of Facebook turned on. They stop watching the video almost instantly and dropped out of the cumulative number in a bulk.

Viewers that watched a quarter of the video

Out of the total impressions, 25% of our video was watched 42,685 times. These are the people who continued to watch our video because they wanted to.

Viewers that watched half of the video

Moving forward, the remaining 39,575 views on the video extended to 50% of the length of the video.

There was another decline of 4,022 which is a total of 10% of the total views after watching half of the video.

Viewers that watched 75% of the video

The remaining 35,553 viewers watched a whopping 75% of the video. After this, the video experienced a decrease of 10,027 views which is a whole 28.2% of the entire viewership.

This decrease in the number of viewers is even heftier than the last drop that was experienced.

Viewers that watched all of the video

The average percentage of the video watched is 73%. Out of a 47second video, a total of 31 seconds was watched on average. This is a very high number of views so we can deduce that our video performed sufficiently well.

There are several conclusions to be drawn from this data that could help you monitor how your video advertisement is faring on Facebook.

We can successfully deduce that a fraction of the viewership that is 18.7% stops watching after the first three seconds because they are only shown the video due to the autoplay feature, or because they are the apathetic public to the advertisement.

We can deduce, from this drop, that this is the point where we could definitely make the video more engaging or try to conclude the key message before the audiences drop at this point in the video so that the maximum number of viewers can absorb the message of the video.

How to make cost-effective improvements to your video?

Instead of remaking and improving the video from scratch, we now know which areas to focus on.

Compare them to the parts that are performing well and do not have a high drop-out rate. Hence, we’re able to change these low performing parts based on the comparison.

This method of improvement by parts is evidently more cost-effective than working the entire video anew. 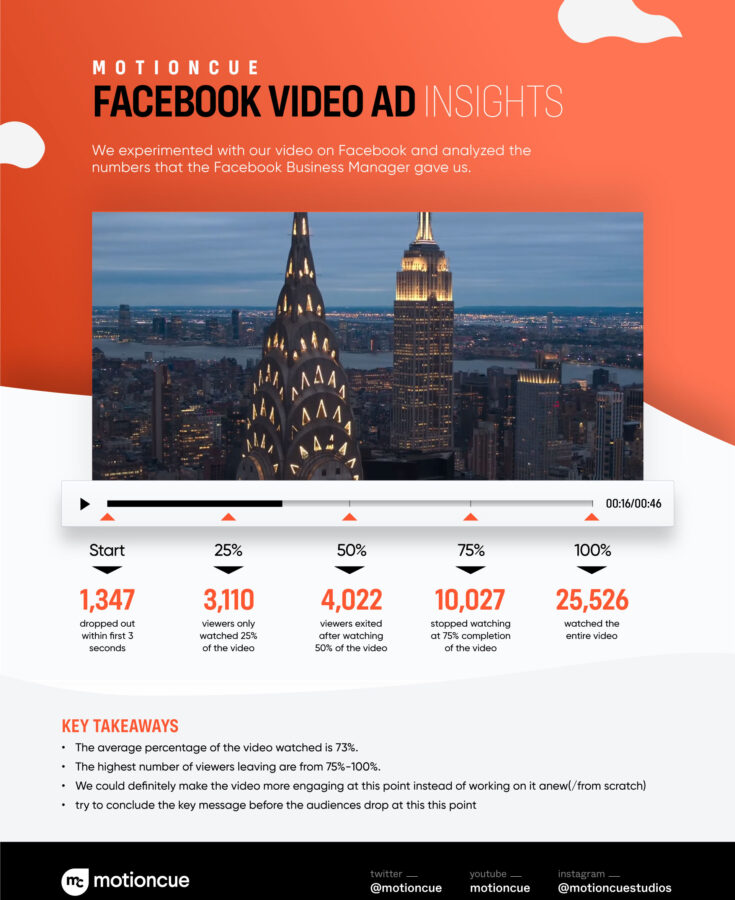 If you’d like to supercharge your marketing efforts with video, contact us to discuss your project. At MotionCue, we love making video content that gets results.

Originally published in June 2020 on B2C.