According to a MotionCue survey, 80% of people feel that they spend a quarter of their time watching videos when using social media. Even if most of them are silent videos.

Billions of views on Facebook and Instagram videos are evidence enough that video is central to the social media users these days.

So, if you are promoting your brand using videos, one thing you need to bear in mind while strategizing is writing a script that works for silent video.

There is no point in being coy about it. We have all been there, scrolling through Facebook when we should have been studying or working.

It can be quite embarrassing when sounds come blurting out of our phones while browsing on Facebook. The stealth mode is blown and all the attempts at being discreet gone to waste.

It has to happen only once for us to go to our mobile settings and turn off the sound for Facebook because let’s face it, no sound on Facebook is better than a loud noise catching you off-guard.

For this reason, a large percentage of videos watched have no sound on Facebook with silent autoplay the default option.

It resulted in Facebook muting videos altogether. Only when the users tapped the clip, the sound came on. Statistics have revealed that the viewers prefer no sound on Facebook videos.

Since February 2017, Facebook eliminated this silent video feature and that the videos will play with sound as long as the sound on the mobile device is turned on.’

Consequently, this ended up making people mute Facebook altogether in their mobile app settings. Hence a large percentage of viewers with no sound on Facebook videos.

Since this announcement, major publications like Cosmopolitan, The Telegraph, and Times have said that plenty of viewers will willfully surf their Facebook in sweet silence. 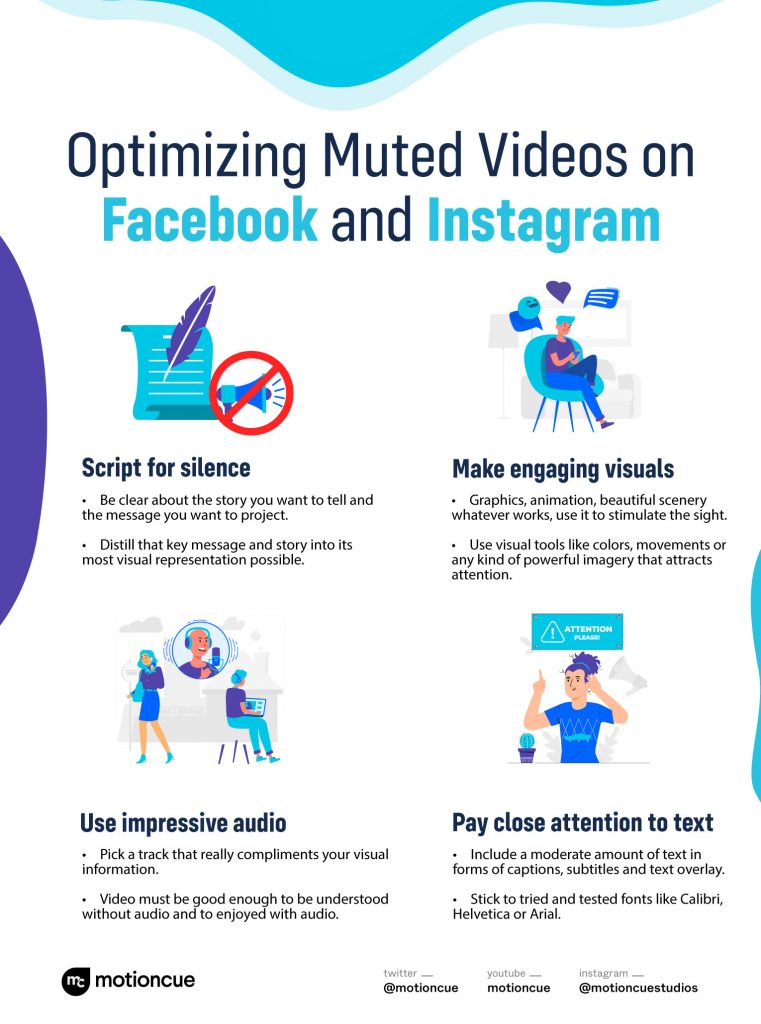 Why should you script for silence

Even Facebook’s data suggests that you might want to tweak the production process to have the audio compliment a silent watch because 80% of people display a negative reaction when faced with an abrupt loud sound in the videos.

Since this is a need that the audience presented, it is up to the makers to cater to that needs by adjusting the production process. It will not only save investment in audio but also save your investment from working counterproductively.

When you make a video that makes sense with or without the sound, you give your audience the liberty to choose how they want to interact with your video. In addition to that, you add the factor of speaking volumes through silence.

It is not yet confirmed how the statistic has evolved since Facebook changed its policy by playing the sound, but it is safe to say that many users still watch without the sound.

For this reason, creating a video that can provide value without the sound should be a crucial part of any content making a marketing strategy.

Think Charlie Chaplin. There was no sound in films in the 1920s. The makers of Charlie Chaplain nailed the silent video part. There is a thing or two we could learn from them.

There are some key strategies that one must keep in mind before crafting a silent video for social media outlets. Here is how you can Optimize your video to play without a sound.

Plan ahead and script accordingly

Instead of improvising for silence as you go, you must think your script through before going into production.

Be very clear in your mind about the story you want to tell and the message you want to project.

Once you have that isolated, try to distill that key message and story into its most visual representation possible. However, there is always a requirement of language that cannot be denied.

You can include language by way of subtitles, captions, or short snippets of text on-screen. Design your visual imagery in a way that the language you include in the form of text does not compete with it.

It is also a matter of ease in watching audio or no audio, people prefer to watch videos with subtitles in them.

Make the Visuals as engaging as possible

When you don’t have audio competing for the attention of your audience you have to add value to the visual characteristics of the video because they are the only thing appealing to your sensors.

Graphics, animation, beautiful scenery whatever works, use it to stimulate the sight.

Since a large number of Facebook and Instagram videos are watched on mobile devices, the screen is also very small. So, you have to factor that in as well.

There are several tools online that could help you make your video more interesting. VideoScribe is a simple online whiteboard animation tool that helps you add animations to your video.

Consider different visual tools that you can employ to capture the attention of the viewer. Be it colors, movements, or any kind of powerful imagery that attracts the viewer towards themselves and not just be ignored.

Why would you invest in sound effects and music when you are looking to design a video that is to be played without a sound?

But what if someone plays the sound in your video and find your choice of audio completely repulsive. That could be off-putting and you could lose the audience.

This is why you have to pick a track that compliments your visual information for those who end up listening to the sound of your video.

So, your video must be good enough for them to be able to understand it without audio and to enjoy it even more with audio.

Try toggling the sound on and off during the film Dunkirk. You will get what I am saying.

To make your video easy to consume and decipher, on-screen text can prove to be your best friend. Try to include a decent amount of text. Not too much and not too little.

It can be included in forms of captions, subtitles, and text overlay. Make sure that it is convenient to read. Stick to tried and tested fonts. These include Calibri, Helvetica, or Arial.

If you are an independent content creator on YouTube, you can find various services online that can help you up to your game.

Silent videos you can take inspiration from

There are some great examples of social media channels that design videos specifically for a silent watch. Here are some examples for you.

Quick and easy to make recipe videos on Facebook are a sensation for all home cooks, and even if you are not a cook, they are just too darn comforting.

The video covers all the steps required to make a dish in fast-forward giving it an easy and entertaining vibe.

The visuals are accompanied by peppy music and a text overlay describing all the ingredients and some instructions.

All of this results in making the video fun to watch and entertaining even with no sound on. This is the page that has north of 80 million likes.

A music streaming platform must have amazing audio in their videos. That is what anyone would think. But Spotify plays you on this one.

They often launch promotional videos with no sound at all. Isn’t that unexpected? It sure is unique and out of the box for a business built around music.

They build their message around a text card and don’t require any sound in their script at all. It still manages to capture the attention of the audience.

Pink Floyd's The Wall? The Beach Boys' Pet Sounds? Björk's Biophilia? You can only choose one album…

The Dodo is a fun and informative channel on Facebook at is built around interesting and entertaining facts about animals. They have over 20 million followers.

Their video can serve as a great example of when videos are designed in a way that they can be easily understood and enjoyed without audio.

What The Dodo does is to use textual captions to drive the narrative of the video. They also have that added benefit of having those cute and cuddly animals as the center subject of their videos that draw the attention of the viewers.

With more than 12 million followers on Facebook, Tech Insider is one of the leading pages that post videos entailing science and technology news.

The interesting part is that they also design their videos in a way that if watched without the sound, they are equally informative.

They demonstrate and explain elaborate and complicated things using graphics and animation. These videos are very carefully planned and use text most optimally to perform well when played with no sound on Facebook.

Trailers are usually immersed in high-intensity music and/or narration. What do you do when you know that your audience may not choose to have their audio turned on?

You can’t go on about it the same way with striking audio tracks and not even have the dialogues have the same impact in silent videos.

With fast-moving visuals and textual information including captions, on-screen text, and subtitles, Netflix has this formula all sorted out. It is enough to sell the movie to the audience without any sound at all.

Now that you have learned a thing or two about making a silent video look good, I will leave you to wing it. Or if you want expert help in getting the most out of your Facebook video, contact us.