Our line-up of the 6 Best Free GoPro Editing Software

Editing is powerful. It absolutely makes or breaks your video project.

When you get an action camera like GoPro, you want your video footage to look like something out of a professional travel vlog. Though there are a lot of factors that come into play to make that happen, it’s GoPro video editing which transforms your footage from a home video to a cinematic wonder.

Depending on what tools and options you use, you can draw your audience’s attention and convey your message in a crisp and clear fashion. But the reason why most people back out of video editing (apart from the apparently daunting task of actually editing a GoPro video) is the high price of many professional video editing software.

With this list of the best FREE GoPro video editing software on the market, you can experience the promise of awesome video editing without breaking the bank.

Here’s an infographic that lists the pros and cons of the free software mentioned. 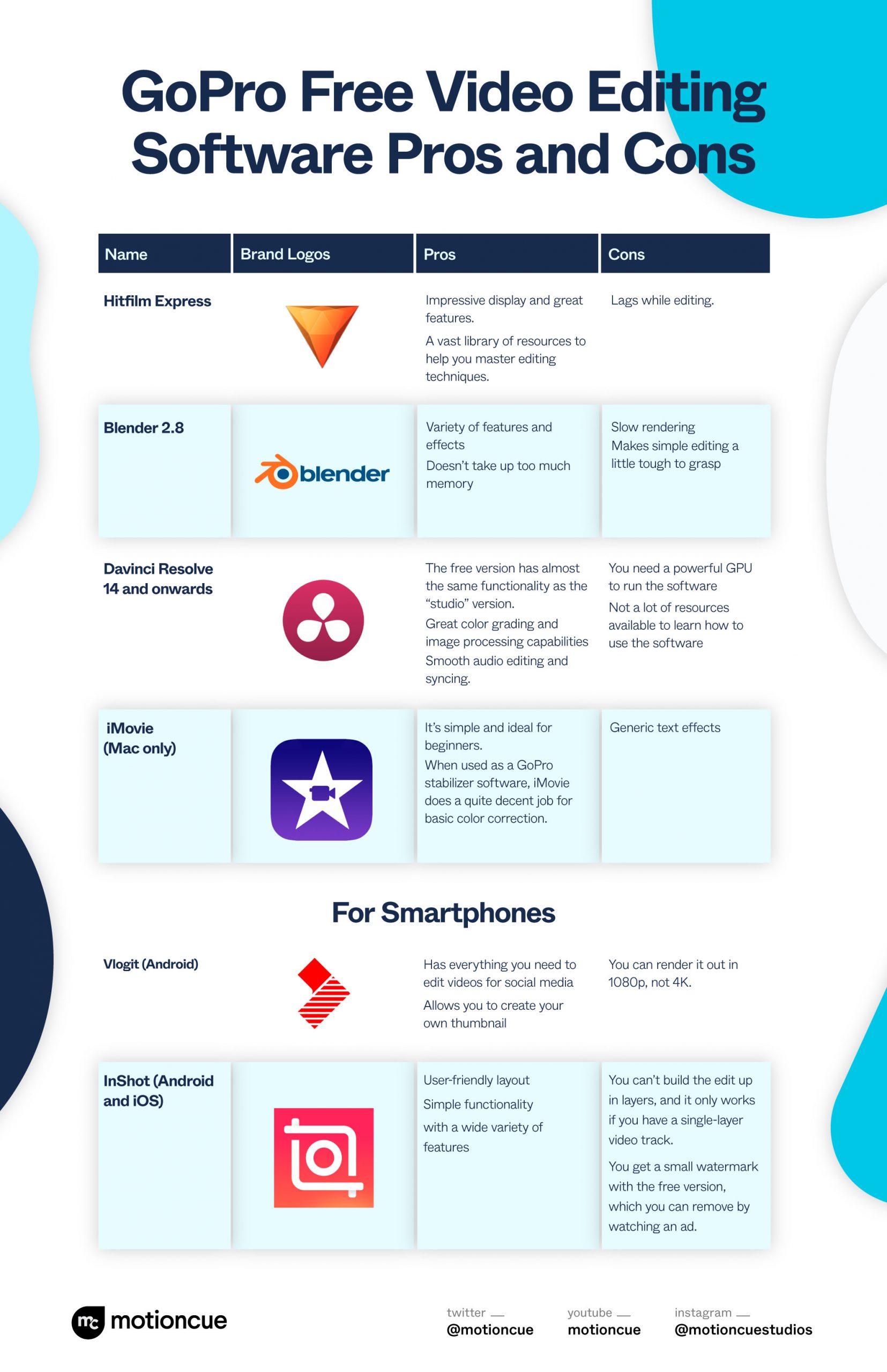 This wonderful free software combines the features of Adobe Premiere Pro and After Effects. With Hitfilm, you can do all the traditional video editing stuff, but also get to ramp up your game by adding in cool 2D and 3D special effects.

It allows you to add some really crazy special effects such as the futuristic heads-up display that you would see in Iron Man or even lightsabers from Star Wars.

Now, if you’re not looking for any fancy editing, no problem, you can stick with the simpler GoPro video editing style of cutting and splicing the video and syncing in your audio to get the job done.

If there is one word to define this free software, it is dynamic. Blender offers a world of effects and options to play with to let your imagination come to life.

However, this same versatility can actually be its drawback as many newbies find it quite hard to get a hang of using it at the start. Nonetheless, it offers a world of features and effects. And for people who have gotten a hang of Blender’s complex but beautiful interface, they absolutely love it.

Now, Blender can be used to do a lot of things — 3D artists primarily use this software for modeling, animations, compositing, simulation, and game programming. However, Blender can also be used as a video editor.

In fact, it can do a pretty good job as a video editor alone thanks to the huge array of effects it offers. Simulations and effects are an important part of any 3D program, and Blender owns this video production aspect like a pro.

Simulating fire, smoke, and fluids to rigid bodies and particles, you name it and Blender has it in store. Also, since it is an open-source 3D software, independent developers and artists keep creating even better-looking simulations and add it to the program.

And, the good news is that, based on users’ reviews, Blender 2.8 is easier to use than the previous versions. If you want to dive into the complete detail of how to use Blender 2.8 as a GoPro editor, this tutorial by Christopher Lum can be a good place to start.

If you want the look of your films to stand out and look big-budget, Davinci Resolve is an awesome choice for editing your GoPro videos.

Putting on a good color grading on your video can be super time-consuming.

This is where Davinci Resolve can be incredibly helpful. The software has some of the best color grading and color correction features out of any free software. In fact, it seems unbelievable how a free software can have this option well at par with many high-priced video editing software like Adobe Premiere Pro.

Another great feature is the option to choose your own software layout. Assuming that you have some experience in editing videos, it is likely that you’d have a preference for a certain software. Say you have used Adobe Premiere Pro before and prefer its layout, Davinci Resolve 16 offers you the option of “Select your own Keyboard Layout” from the listed software options.

Note: Just make sure you don’t make the mistake of downloading “Davinci Resolve Studio 16”. The “studio” version is the paid version. To download the free version, choose “Davinci Resolve 16”.

If you’re a Mac user, you already have a video editing application that comes installed in your MacBook by default — iMovie. It’s free and one of the easiest software to use for video editing. While some may question its capacity to create polished professional videos, the verdict is that it does a pretty good job overall.

Made by the creators of Filmora Wondershare, Vlogit is a free video editing app that has basically every single feature you need in a mobile video editing app. With the app, you can add stickers, text, and transitions. It offers options for speed control, vignettes and color controls. In short, it has everything.

You can render it out in 1080p, not 4K. Though a limitation, 1080p is generally good enough for social media.

With InShot, you can trim your videos with settings that are based on the particular aspect ratio for social media. You can add or remove music from your videos and add tons of other features. Simple and easy to use, InShot is a wonderful free software for editing videos on-the-go.

Filmora Wondershare deserves an honorable mention as the trial version of the software does let you experiment with the software if you want.

So, the full version of the software is available on trial but there’s a big catch: it is only when you export your files on Filmora Wondershare ‘free trial’ version that the notification pops up asking you to buy the software.

Yes, it can be a bummer, but it does serve the purpose of familiarizing you with the software, and for that Filmora Wondershare pans out to be a pretty cool contender.

It has crispy, clean aesthetics and incredibly easy-to-use layout. In fact, because it has a super user-friendly interface whilst being a highly professional software, it draws users in and they opt for the paid version, which isn’t too pricey itself at $60.

With the paid version, you get a greater variety of features including continuous updates of the software. Overall though, here are the pros and cons:

So that covers our line-up for the best free software you can get to edit your GoPro videos without spending a dime. With software like Davinci Resolve and Blender, the learning curve may be steeper than the other programs on the list, but the features offered are well worth it.

On the flip side, if you are a beginner, you might want to start out with something simpler to get a good grasp on how to edit your GoPro videos and go on to become a pro.