You either love it or you hate it. This little bird app exists in the extremes of the likeability spectrum. However, when it comes to marketing, Twitter video ads can be a real head-scratcher.

As a digital marketer, you have to weigh in all the pros and cons of an app before coming up with a video content distribution strategy. 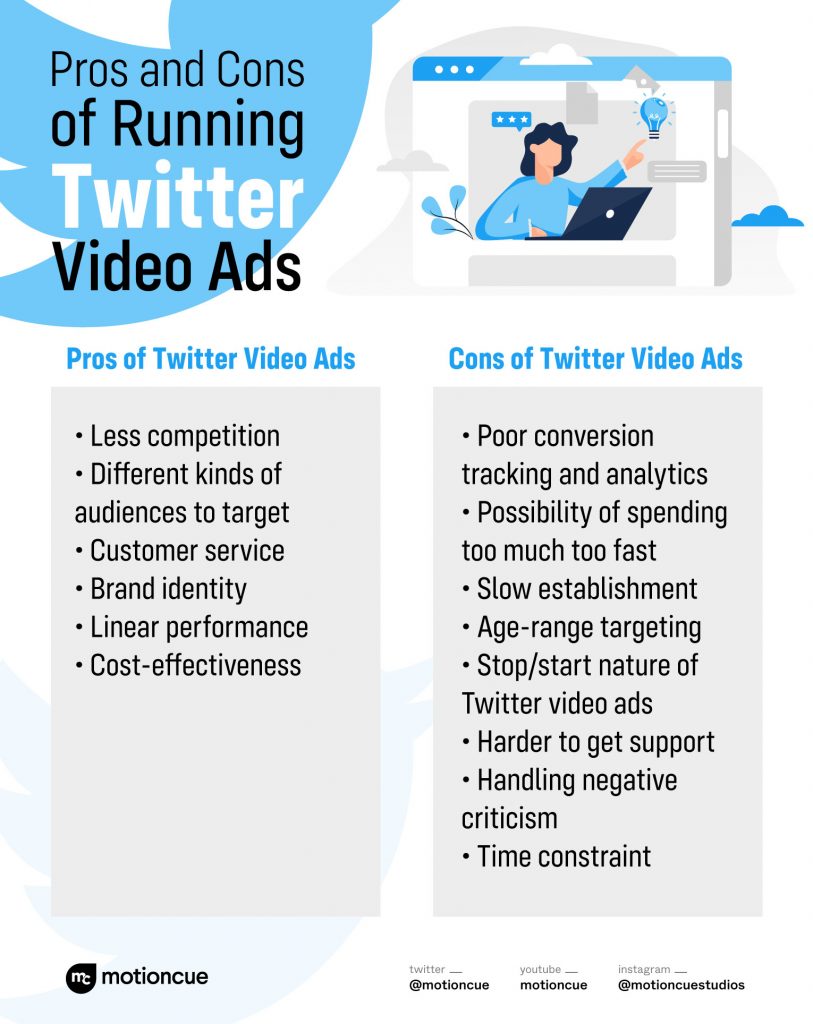 How many gurus do you know are putting videos and ads on Twitter?

There are not too many people talking about it which means cheap cost-per-thousand impressions and cheaper cost-per-clicks.

There is also a ton of traffic available.

Different kinds of audiences to target

Twitter has a very large user-base in terms of numbers, demographics, and psychographics that holds a lot of potential customers for you.

You can use different types of hashtags to reach different audiences based on locations and trends.

There is also the option of interest and handle targeting available on Twitter. You can target all the people who are following certain handles.

For example, UK’s Martin Lewis, founder of the Money Saving Expert has a huge following. You can target people who follow that handle with any money-saving offer, they are more likely to convert into leads.

There are also celebrities, athletes, and influencer handle targeting that can help you target an audience that is more relevant and on-brand with your desired target audience.

There is a certain type of user that is on Twitter and not on Facebook. This person likes to be informed, educated, and up-to-date about the current affairs, news sharing and articles.

This is a certain vertical that you will be addressing on Twitter that you cannot on Facebook.

The reply feature of Twitter is very easy to use and open to all. It is a public two-way communication that allows you to interact with your customers.

If done right, it can show your brand in a very positive light. It is also a great source of feedback and can help you improve your services.

Promoting videos on Twitter can really help with communicating your brand identity and personality. You can depict your brand’s ethos efficiently and effectively through Twitter video ads.

All of this results in making your business appear more appealing.

The two-way communication that we talked about also helps humanize your brand to the target audience.

If you have been running Facebook video ads and you have seven days in which things have gone brilliantly and you have gotten a lot of leads from running videos and ads.

If you don’t change anything and just let them sit there, you will see the traffic drop almost as if from a cliff. It could pick up the very next day out of the blue.

There is no rhyme or reason to how and why a Facebook video could take.

However, with Twitter, if you are bidding on a click and you don’t change anything, the graph of traffic will continue as it was. This is called a linear performance.

The stress that comes with the ups and downs of Facebook is just not there in Twitter video ads. It makes It just more measurable, unlike Facebook which just drives you around the bend.

While you can choose to invest in promoting your content, it is observed that you can also reap substantial benefits organically.

You can sustain visibility through organic interactions and posts. However, your twitter video ads need to be top-notch for that.

Flexxable has been running Twitter ads for about three and a half years now. They ran an offer for a particular vertical.

They were getting paid eighteen pounds per lead but they really hit the paydirt with one of the audiences they were targeting.

On the analytics page, they could actually see the people going through the funnel and hitting the “Thank you” every ten seconds.

The rate of the people that they were hitting, generating into leads was accelerating very fast. They had to stop the funnel because the client simply didn’t need any more leads.

This is something that is unprecedented on all the other platforms. If you get the funnel and the offer correct, then twitter video ads can work wonders for you.

There is an issue with iOS devices and the way Twitter monitors conversions on them. As a result, you will only be able to see roughly one out of ten leads.

So, if you are trying to optimize a Twitter video ad campaign, you will see a lot fewer leads than there actually are.

You have to be careful not to let any bad performances fool you into shutting down the ad. It is entirely possible that they are performing quite well without you knowing it.

To get around this, you have to have your conversion tracking set up with a third party. It can be Google Analytics or your own software.

It still proves to be a challenge to set up but if you are putting up video content on Twitter, you have to sort out your tracking yourself instead of relying on Twitter Analytics.

With Google Ads, whether they are YouTube ads, search or Google Display Networks, everything is convenient and user-friendly. It is the same for Facebook.

Twitter is not quite there yet. Some hey are still struggling with the user interface. It poses a challenge in things like figuring out the analytics and targeting the audience.

Possibility of spending too much too fast

A rookie mistake that any digital marketer can make is bidding too high on your cost-per-clicks, you can risk blowing off your entire budget on just one ad.

You have to keep an eye on how much you bid and on what.

Start with lower bids and then gradually edge them up until you start getting traffic.

It takes two weeks to get an Ad Account up on Twitter. So, if you are running video ads on Twitter, you may have quite a bit of a waiting period at your hands.

There is a lot of confusion in the age-range traffic targeting on twitter where different age brackets are showing with quite an overlap.

The selection process is quite ordinary, the confusion mostly just arises in the reporting. For example, they would be showing you traffic in the 18-60 years of audiences.

There will be subsets with proportions of the entire traffic of more specific age-brackets like 18-25 as well. This makes it difficult to decipher what is working on which age-bracket.

When you start putting video ads on Twitter, you naturally want to generate a lot of volume on them. The complication here is that they start you slow.

You only get a few hundred bucks to spend here. After you have spent that, you are going to have to hit up support for more.

You have to repeat the process 5-6 times before you become a trustworthy advertiser on Twitter. All of this leads to a very frustrating stop-start experience.

Harder to get support

This gives way to our next con for running Twitter video ads.

You can find amazing support on Google Ads and Facebook. But that’s not how it is on Twitter.

You may also be left in limbo if you run into problems that Twitter Support is unable to help you with.

It is easy to become overwhelmed by the number of interactions you receive on a daily basis alone.

Negative feedback in public view can give your brand a bad rep. It is very tough to recover from that.

The only way around this is to deal with complaints in the most professional and empathetic way possible.

Since there is no censorship and people are allowed free speech, it gives way to hate-speech as well even though it is against Twitter guidelines. However, most objectionable stuff goes unnoticed.

It is often said that no publicity is bad publicity, however, it is a huge risk in itself to expose your brand to the threat of losing its integrity.

However, if you want to get the most retweets and clickthrough rates, 12-1 pm and 5-6 pm is go-time for you.

In addition to that, the Twitter video limit is less than 2 minutes twenty seconds. Twitter allows you to edit and trim your videos within the app or website. However, it is smart to do that before, as to not compromise the content.

It may be a challenge in itself to be able to fit a whole message in that time slot. The best you can do is repurpose some of your old video content onto Twitter

With all of that information about the pros and cons of Twitter video ads, you can decide for yourself if Twitter is the right platform for you.

If you want to have a video designed specifically for your Twitter, feel free to hit us up. MotionCue will be happy to help.