Stop Shopping for an Explainer Video Company and Read This!

So you’ve decided you want an explainer for your business but also want to know the bottom line for producing a highly engaging video that actually delivers results.

We get it, it can be a timely task to contact every production studio for pricing and timeline. Not to mention, that a quick online search reveals dozens of studios that seem to do pretty good work.

So, how do you narrow it down to the one that’s going to offer an excellent video, for a good price?

A friend of ours, we’ll call him Joe, recently joined a startup. The start-up was looking for an explainer video, and so naturally, Joe reached out to several different explainer video production companies (including us) to get quotes. The responses he got from different companies were very interesting, and even better, he decided to share them with us.

We can’t keep this good of a secret to ourselves, so here are the basics you need to know to compare your options.

Other information: Their script was already completed.

Joe sent these exact same requirements to each of the explainer video companies. Let’s have a look at their quotes:

Wyzowl (Wise Owl) quoted for the required 90-second video. The final estimate came around to $5,344.

Payment Structure: 30% upfront. 50% of the remaining amount to be paid upon approval of the storyboard. Completion time is around 5 – 6 weeks on average.

BreadnBeyond offers four different packages, each with its own sets of features. However, their prices of the packages are not listed on the website. 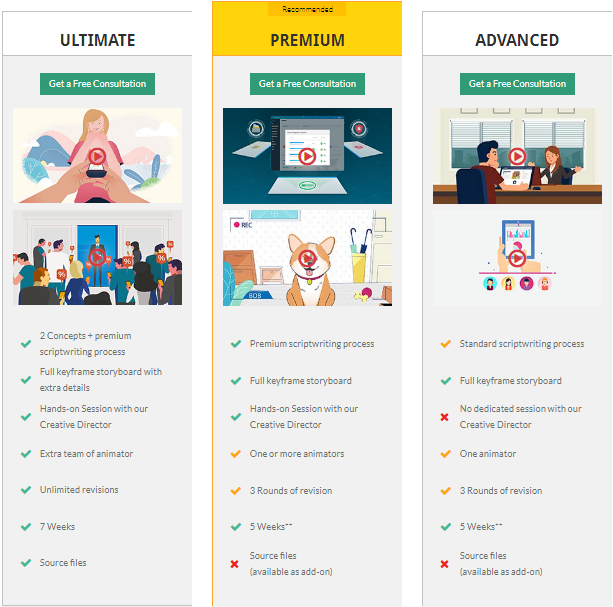 If you search online for “explainer videos,” you’re sure to come across Demo Duck! Maybe it’s because of the brand’s popularity that they are able to command a higher starting rate.

Switch Video is one of the more popular video production agencies and their quote reflects their reputation. The completion time for a 90-second video is 8 weeks.

A quick look at Explainify’s portfolio reveals that they are likely one of the high-end production agencies.

Epipheo is another high-end explainer video animation company. They were happy to commit to a one-month deadline.

Yum Yum Videos has a great portfolio and is respected in the explainer video biz. So, naturally, Joe approached them for a quote for his video.

Their quoted price was $6500 for a 90-second video. Yum Yum videos required 6-7 weeks for completion.

Depending on your 90-second video project the rates will vary.

The costs will vary based on the style of video. All services are included but you’ll have to provide the script.

From everything we found out, the following things became evident:

HOW MUCH DID IT REALLY COST TO MAKE THE 5CROWD VIDEO?

Our friend, Joe, knew the budget on 5Crowds video— We were able to create their video for $5,000 and did it in 4 weeks. In the end, our friend convinced his bosses to work with us on their explainer video!

Read more: How Is the Pricing of Animated Videos Calculated?

Every studio has its own style, quality, and price point. If you’re the boss, then the choice is yours. Hopefully, Joe’s research offers a snapshot of the market. If we’re the kind of studio you’re looking for, then let’s talk.

If you are not much of reader, we recommend going through this infographic:

Read more: How to Pick an Explainer Video Agency