What Are the Steps Involved in Creating an Animated Film?

Do you too have memories of huddling with your parents on warm winter nights to enjoy watching your favorite Disney characters on TV? Do you remember beaming at the signature cry of Tarzan, and feeling as though you were with him swinging from vine to vine across the jungle?

From the majestic Pride Rock to versatile 3D characters, animation has been an integral part of our childhoods.

You may have always wondered how people manage to create such epic works of art for thousands to enjoy.

Maybe you’ve seen some behind-the-scenes footage that show glimpses of how these films are made. With teams of people working tirelessly to bring a massive undertaking into fruition.

In this post, we have broken down animated movie creation into simple steps so you can get an idea of everything that needs to happen to bring a masterpiece to life. 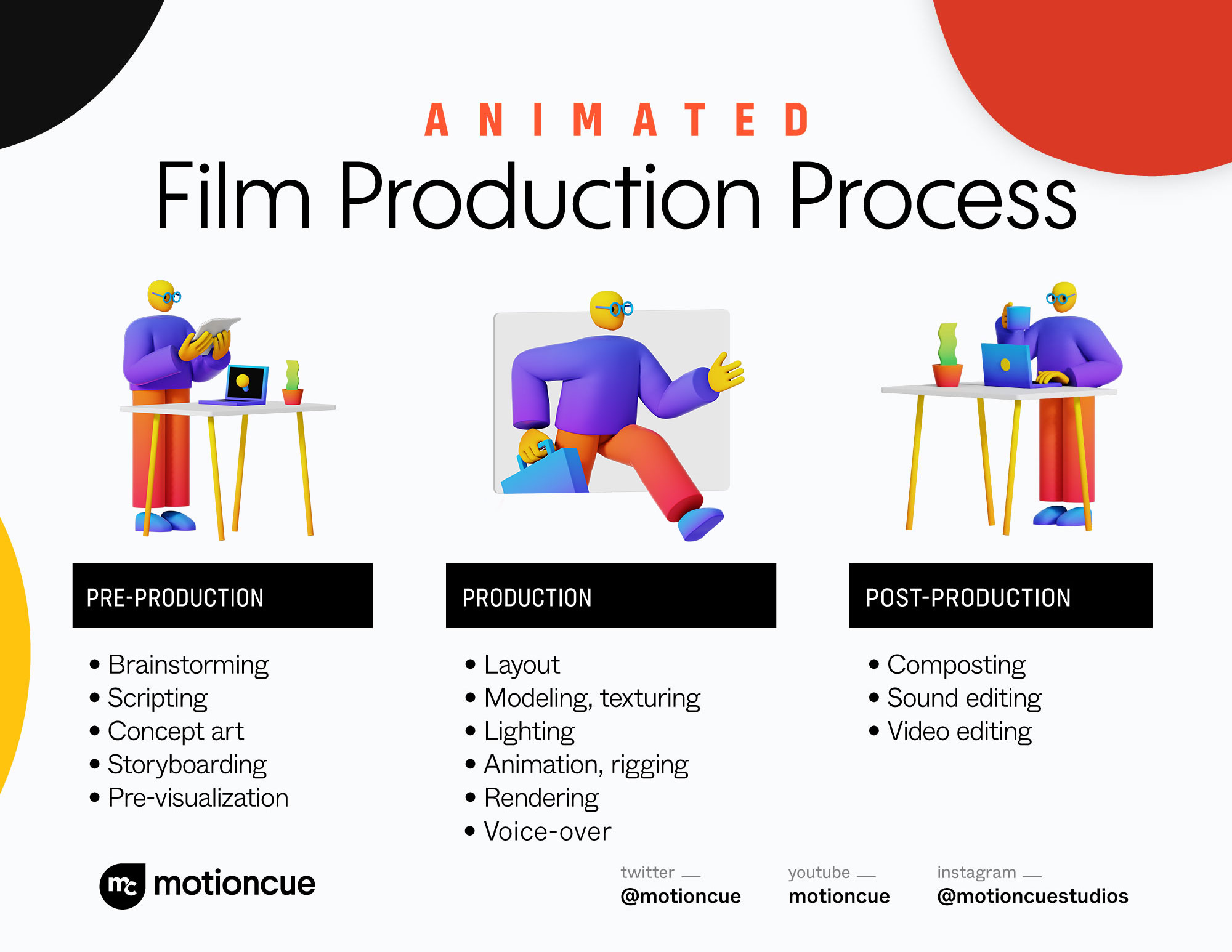 This is the phase where you refine your main idea. You take your concept, specify it, and then turn into a feasible plan.

Once your story has been finalized, you write down your script and then plan out shot sequences.

So basically, the major components of pre-production are these key steps:

The premise of this process is simple — you have to write as many ideas down as you can. At this point, don’t worry about picking from any of these ideas; you can easily pick and choose from the list once you have it ready.

It can take several rounds of brainstorming to find ideas that click and to uncover diamonds in the rough.

Here, in a nutshell, is how basic brainstorming works.

Come up with a unique plot

Animated cartoons are fun to watch, but quite a great challenge to create. And the main reason is the plot, as coming up with an engaging plot requires creativity; innate talent, and keen attention to detail. Remember, in animation, rare and unique ideas add life to your characters. Avoid familiar plot ideas that you might have come across.

Focus on interesting main characters or cast of characters

Also called screenwriting, scripting involves creating an outline of all of the events taking place in your animated film. This includes everything from detailing all audio occurrences, such as dialogue, sound effects, and music score, to mentioning any other important details crucial to unraveling your story on the screen.

In commercial animation, a script presents you an opportunity to accurately express your storyline and plot for the first time.

A well-written script helps to ‘sell’ your idea to prospective directors or studios who may then become interested in filming it. Also, the execution of a successful animated cartoon begins with a good script that enlivens its characters, setting, and plot of the story.

And that’s why screenwriters for animated movies are the silent champions of animated films.

The story is ultimately going to come alive from an animator’s touch, but that spark needs to come right from the words of a scriptwriter.

So, while animators get credit for creating beautiful animated movies, let’s not forget that these ideas are born and perfected in the minds of scriptwriters with vivid imaginations!

To ace scriptwriting, these tips will help you throughout the writing process.

Every creative endeavor begins with a concept, especially an endeavor as grand as a movie. When directors or production designers come up with ideas for a movie, concept artists help them turn those abstract ideas concrete.

In short, concept art offers constant visual support for moviemakers and acts as a reference throughout the movie-making process. Plus, it allows you to show your project’s progress to directors, clients, and investors.

Here are some tips for making it as a movie concept artist.

A storyboard helps you to finalize the development of your storyline plus concept art and serves as the backbone of your animation process.

You can create your storyboards by drawing your plot in the form of a comic script. This will help you visualize the animation timeline. Also, a storyboard provides a visual record of the original plan, which acts as a point of reference as you move forward.

The film sequences are laid out into an array of stills along with the relevant detail.

Now that you have done all your background work, this is where the real work begins. Production can involve these key steps.

Layout design for animation is the process of conceptualizing your environment based on the story of your animated film. Then, you go on to adapt it to the stylistic choices of your film.

The primary role of a layout artist is to set the stage on which your animation, i.e. your character and special effects take place.

So, overall, layout artists are responsible for setting up all the elements required for establishing the animation sequence of your film. And in doing so, they do most of the heavy lifting of assembling shots into virtual scenes.

When creating a 3D production, layout is generally the first step to assembling your story scenes. In a 3D production pipeline, you need to carry out rough modeling for every object before you can begin the animation.

Nonetheless, at this stage, you don’t need to add texture or commence rigging.

Modeling transforms your animated features into three-dimensional figures. To achieve this, modelers have to work closely with art directors to ensure that all models are designed in compliance with the characteristic visual style of your animation.

They then assist the technical animator and developers to furnish skeletal framework and develop skin. Once that is done, modelers go on to add facial expressions, paying close attention to adding specific muscle tensions that may be required.

Once your model is ready, it can then be sent to texture painters and rigging department to add in final touches before it is sent for animation and rendering.

Texturing is used to tap into one of our primary senses, touch. Artists think a lot about stimulating and engaging their viewers’ sense of touch, even if they wouldn’t exactly touch it.

To enhance the look or feel of a surface, texture artists work with a number of things, such as wrinkles, fur, scales, sweat, and mud.

Animated films without virtual lights would be extremely flat. So, lighting artists use light to support the emotion of their story and make the film look and feel believable.

The main mechanisms involved in this process are based on different types of light sources used to enhance the beauty and emotion of a film.

In general, lighting helps to achieve the following benefits.

But before you can animate your piece, you have to take care of something called rigging.

Rigging creates connections between objects in your story to make animating them a lot easier.

Through rigging, you can represent your 3D characters using a series of interconnected digital bones, working and moving all individual components of your model as one whole.

It can involve setting up and managing controls for your character’s movement and forming a link between the motions of one object relative to another.

If it sounds like a complicated process, then that’s because it is!

Once you have rigged the bone structures of your 3D models, you are all ready for animating them.

Now, it is time to manipulate images to make them appear as moving.

Back in the day of conventional animation, images were drawn or painted by hand. Now though, most animations are made using Computer Generated Imagery or CGI.

This crucial step adds life to characters, enabling us to tell stories and communicate emotions and ideas in a unique, easy-to-perceive way.

This stage let’s creatives defy gravity and unleash their imaginations.

Because in animation, everything can be made possible.

Read more: How to Start a Career in Animation

So, what is rendering?

It is converting models into usable images with the help of specialist 3D software.

Through rendering, you can prepare sequenced rendered images or pixelated base frames.

Once the characters are sorted, it’s time to get them talking. Finding the perfect people to voice characters is a feat all on its own.

Think of Jack Black’s Po from Kung-Fu Panda, Robin Williams’ Gennie from Aladdin, or Tom Kenny’s SpongeBob from SpongeBob Square Pants. These characters just wouldn’t be the same without their respective voice actors.

In the final phase of film creation, you take care of all the ways to polish up your animated work. This involves editing raw footage to cut scenes together, working with sound effects and voice-overs, or in some cases, dubbing.

Overall, there are three main stages of post-production:

In today’s films, it is possible to create almost anything and that is thanks to compositing.

Hours and hours of work focusing your attention to details, a lot of creativity, and a robust arsenal of skills, are the ingredients you need to carry out compositing.

All visual effects or VFX that you see in movies are all a product of this amazing technique.

As a compositor, you will also have to know about the depth of field requirements and what camera/ lenses were used to shoot the shots before you begin your work.

Also, you’ll have to take care of things like color correction, how specific shots will be adjusted with the rest of your film, what elements will make up your compositing, if you require a matte painting, and if any stock footage will be needed, etc.

You take your pick of the issue, use techniques you want to use from a plethora of composting techniques and set about creating your virtual world.

Creating this final, life-like illusion in compositing is one of the wonders of modern-day post-production for both live-action and animated movies.

A sound editor is responsible for everything auditory you pick up while watching a movie.

This job is sometimes called sound design because the editor is essentially designing and creating an ‘aural landscape’ from scratch.

This requires a sound editor to select and balance audios from hundreds of different sources to create desired effects and make the work of art speak to the viewer.

Read more: How to Choose Background Music for Your Video Content

Video editors are not only artists, they are problem solvers, and expend hours editing, reviewing and polishing your work. Basically, doing just about everything that is vital to creating a successful animation.

All in all, animation production is a huge process, requiring great coordination between all different types of artists involved.

We hope this overview of the hefty process will allow you to gain a whole new appreciation for the films you’ve always loved, and for the craft itself.

If anything, you’ll probably just love your favorites even more now.